I woke up with a level of excitement I haven’t felt for a while, we were off to visit Ngorongoro Crater today. I’d heard so much about this place, from friends and customers I’d looked after at overnight Zoo camps at Werribee Zoo, everyone had rave reviews about it!

As we stopped at the park entrance for our guide to do the paperwork with the rangers, we wandered around the information centre, learning about the nomadic Maasai people, the geology of the Ngorongoro Crater and of course the diverse wildlife that calls it home including the Big Five – Lion, Rhino, Leopard and Cape Buffalo. My excitement was growing!

We talked about Ngorongoro being an old volcano and the diversity of wildlife and the animals we were most excited about seeing during our African adventure. For me it was lion, leopard, cheetah and rhino, although I could easily have added another 10 more animals onto the list including giraffe, elephant, baboon, warthog, hyena, etc. For Megsy it was the lion and giraffe. 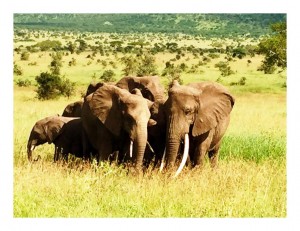 Our descend down into the crater was like we had commenced making our own African documentary. The sight of distant herds of wild zebra, wildebeest and antelopes extending across the plains was incredible!

Upon reaching the bottom of the crater, we were soon amongst thousands of animals from zebra to wildebeest to various species of gazelle to eland (the largest of all the antelope species). We were in awe! This was nature, African style.

For the next 7 hours we explored this incredible ecosystem searching for new animals while also staying put just observing the animals doing their thing, grazing, fighting, running, sleeping, we saw it all. We were also excited at seeing the number of baby animals amongst the herds.

The first sighting of an elephant strolling along from a distant added further excitement. Such a gentle giant and although at a distant, this make bull looked huge! We watched as he made his way around the wetland area feeding on the abundance of soft grass (large male bull elephants don’t have any teeth left so need to eat the soft lush grass near water).

As we made our way around the bottom of the crater which is unbelievably huge, we spotted many species of animals including both the Grant’s Gazelle and the Thompson’s gazelle, a warthog – are these one of the most hilarious animals you’ll come across and more elephants amongst the thousands of zebra and wildebeest.

The day was going along brilliantly when our guide who had been talking on the radio at various intervals started driving a lot quicker than he had been. He was noticeably excited when he said ‘Meg, you’re going to be very happy soon’.

The next 5 minutes as we drive quickly across the plains our level of curiosity and excitement was hitting new levels. As we stood up in the back of our safari jeep looking around us and looking ahead, we saw a few more safari vehicles ahead of us which had obviously stopped to look at something. 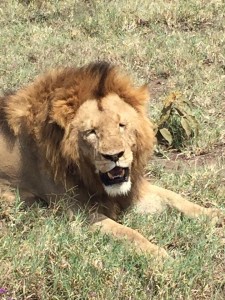 As we approached the vehicles we made out the shapes of 3 lions! Yippee! We arrived to find 3 male lions (all brothers) resting within 2 metres from the road – wow!

We spent the next 1.5 hours watching these amazing animals as safari vehicles pulled up with guests taking a few quick photos before leaving again to search for more animals. We opted for a more immersive experience by staying put and observing the characteristics and behaviours of the 3 male lions.

We watched them move about,often going and lying down in the shade of one of the safari vehicles (including our vehicle).

At one stage the lion walked right passed my window as I filmed it with my go-pro camera out the window, I literally could have leaned out and patted it, that’s how close it was! Incredible!

We left there thinking it would be hard to top that wildlife experience!

After saying goodbye to the lions, we drove 5 minutes before coming across a family of lions – females and young made up of approximately 8 individuals (including 3 Cubs less than a year old) which were around 150 metres away from the road. They were all sleeping (lions can sleep up to 20 hours a day). Another amazing experience!

We headed to lunch to be greeted by a gorgeous waterhole and on closer inspection we saw hundreds of hippo’s scattered throughout the waterhole.