The drive to Queenstown from Christchurch is well worth the trip, albeit perhaps do it when you haven’t disembarked at 5am from a red eye flight from Oz, loaded with heavy handled bags (and not of the suitcase kind!) 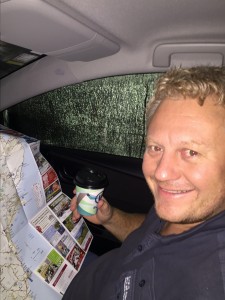 Oh and perhaps hire a car before you arrive as we were lucky to nab the last one after trying 4 different companies.

Eezi card came through with the goods (cheapest with 0 excess and very friendly customer service) and next we were whizzing through the streets of Christchurch in search of good coffee. 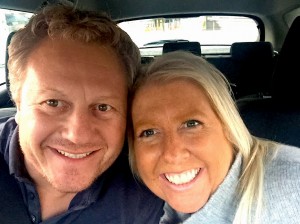 Although we were severely sleep deprived, delirious and bleary eyed, we were both still pumped. My first trip to NZ and Christchurch and I was like a little kid on Christmas Day, full of anticipation and excitement. But, lo and behold, this travelling high didn’t last long. Next, we were driving through the main city, hit with a crumbling silence of devastation. It was so confronting to see some areas of the city looking modern and new, only to find the very next corner a pile of concrete debris, rubbish and a reminder of the tragic earthquakes that destroyed the NZ city 2011.

For those of you nerds into stats like me, it was recorded as a magnitude 7.1 earthquake, but reached magnitude 9 at its epicentre. Extensive ground movement caused a monumental amount of damage to buildings and land and more tragically, killing over 187 people that day. The quake badly damaged not only the iconic buildings and parklands throughout Christchurch but also tarnished its very soul. 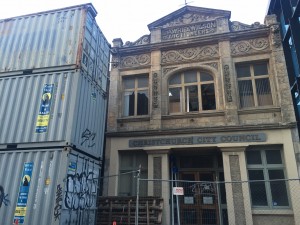 Christchurch’s major role prior to the quake (and more so now) is for tourism and to promote itself as the gateway to the magnificent and completely intact scenic and experiential wonders of New Zealand’s South Island.

Yet, here we were surrounded by a sombre feeling of what happened over 5 years ago. However, like all post  a  disaster recover stories, this one has a happy ending.

Amongst the rubble reminiscent of the quake, was potential and opportunity and a community rebuilding itself and displaying resilience and courage to regain its soul and spirit and to get businesses back on the ground, after all tourism was (is, and will continue to be…) its lifeblood.

And here’s the happy ending part, full to the brim with innovation and creativity that is so impactful, it’s also humbling. Vacant blocks created from demolished buildings have been used by local artisans and entrepreneurs as art centres, free libraries, bars and entertainment areas. Christchurch’s “pop up city” phenomenon has earned the city a place on Lonely Planet’s must visit cities for 2013. How’s that for ingenuity! The historic Anglican Cathedral which dominated the centre of the city and crumbled during the 2011 quake is being temporarily replaced by the construction of a church which is being dubbed the Cardboard Cathedral. Genius! 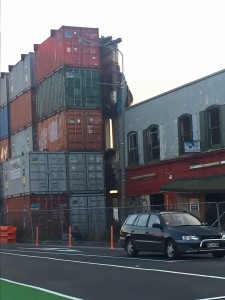 The re:START is a shopping mall of 45 shops, constructed from the shells of shipping containers, is now one of the most popular shopping areas for both locals and visitors.

I love how the NZ people have flipped such a crippling event into a shining beacon of hope.

So, now, after you have read this what can you do to help? It’s simple, get over there people! Just one coffee, one overnight stay, one pint at the pub…can all make a difference. The number of Australians visiting New Zealand has enjoyed slight growth but we are still sitting at just over half of the pre-earthquake levels. Do it. It’s so worth a the trip over the ditch.